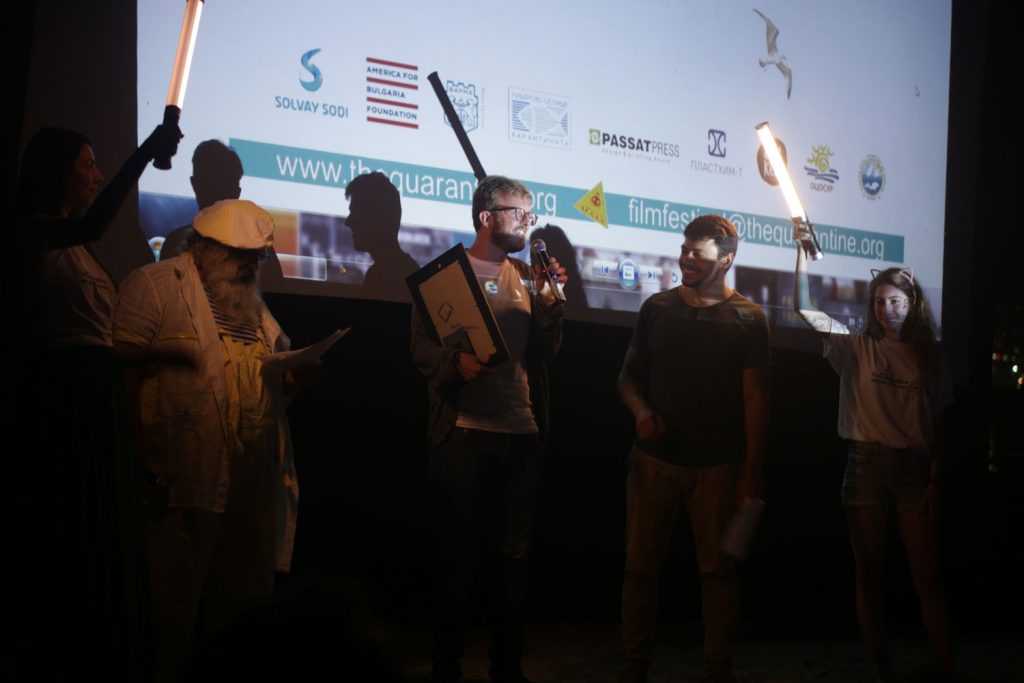 The Quarantine team decided that all films which were selected deserve an award. The plaques and diplomas that we have given in the past 3 years have always been symbolical and with a personal message to the artist.

We continue this tradition with the difference that the plaques and diplomas will be honours for participating and attending the festival.

We believe that there is no place for competition in arts. Every artistical act is unique and deserves admiration.

The Quarantine festival awards the following films with a plaque and an honorable diploma:

To Tufan Tastan with the film “Words fly away” for proving that intellect is superior to brute force.

To Gibran Ramos with “8.1 Degrees of guilt” for turning personal emotions into universal values.

To Tomas Vanz with “Intra” for revealing the white essence of black holes.

To Mattia Mura with “Notes from anywhere” for forcing analogue approach in a digital era.

To Kiril Karakash and Svetislav Podleshanov with “The water” for expressing the importance of water (especially on mornings with hangover).

To Ben Proudfoot with “Kunstglasser” for affirming the supporting role in life as a main role in cinema.

To Sophie Linnenbaum with “PIX” for the funniest and shortest presentation of a standart and boring life.

To Mohammad Bakhshi with “Are you volleyball?” for giving a solution for cooling down tensions in hot areas.

To Mahdi Borjian with “Soul mate” for presenting love as a universal cure.

To Felipe Espinosa with “The only argument of piece” for defining the lack of choice in our lives as the longterm choice to live it.

To Hayk Matevosyan with “Three men and a dog” for giving the dog its place back in the boat, among the three men.

We award Solvay Sodi with the newly established prize “Anguchka” for friendship and financial stability for the past 10 years.

We would like to thank the fishermen from “The Quarantine” fishing village for their hospitality.